Segment: From RUSH with Love

Lee takes note of slights against his band, though his score-settling is gentle. Aerosmith were notably ungenerous to Rush in their opening-act days, denying them soundchecks and lowering their onstage volume. “Most bands were afraid of Rush,” says longtime lighting director Howard Ungerleider. “They were being outplayed, and they hated it.” During Aerosmith’s early-Eighties struggles, the Joe Perry Project opened for an ascendant Rush, and as Ungerleider recalls, Lee told his crew to treat Perry generously, to let himsoundcheck as muchas he wanted. As the story goes, Lee then stopped by Perry’s dressing room to ask if he was being treated well. When Perry said yes, Lee replied, “Good. Because I would never want anyone to feel the way we did when we opened for you.” (Lee doesn’t recall this precise exchange, but says Perry apologised.) 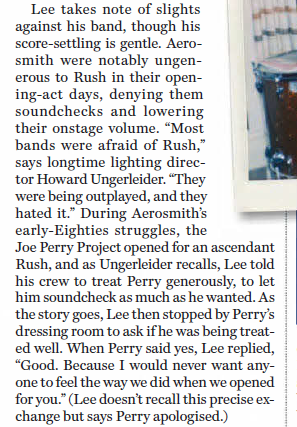